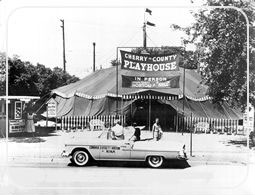 The original home of The Cherry County Playhouse as it looked in its first season, 1955.

The Cherry County Playhouse was founded in 1955 in Traverse City by radio actress Ruth Bailey and was one of Michigan’s first professional theaters. It began in a red and white striped tent and showcased the talents of such Hollywood stars as Joe E. Brown, Zasu Pitts, Charley Ruggles, Pat O’Brien and Frances Farmer. The Playhouse marked it’s second decade by moving indoors under the Dome at the Park Palace Hotel.

In 1976, Miss Bailey sold the theater to comedian Pat Paulsen and Neil Rosen, a successful Los Angeles television writer and producer. Under their leadership, The Playhouse brought such stars to stage as Efrem Zimbelist, Jr., Dick Van Patten, Arte Johnson, Florence Henderson, Burt Reynolds, Robert Morse and Rosemary Prinz. Many of the stars returned in subsequent years including Paulsen who appeared in over 25 productions.

The 1990s Mark A New Era For The Playhouse 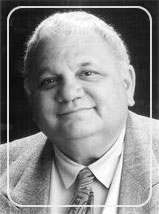 After 36 years in Traverse City, remodeling plans at the Park Place Hotel forced The Playhouse to look for a new home. A five-month tour of 20 sites in Michigan lead the Playhouse to the historic Frauenthal Center in Muskegon on the shore of Lake Michigan in 1991.

The move to Muskegon allowed The Playhouse to begin producing large-scale musicals and plays in the 1,750 seat Frauenthal known for its outstanding acoustics. The theater includes a majestic proscenium arch, hydraulic orchestra pit, state-of-the-art rigging system and expansive backstage space allowing for ease of movement of scenery and cast members.

Community support of the facility and its tenants (including The Playhouse) led to a tax supported $8.2 million-dollar renovation of the Frauenthal in 1998. The details of the design with cherubs, gilded grapes, acanthus leaves and intricate plasterwork are once again apparent with the return of the original paint scheme.

Milestones at The Playhouse

The Playhouse has been home to several world premieres including The Presidents, Another Summer (the musical of On Golden Pond), Lunch and Beautiful Dreamer: The World of Stephen Foster. While in Traverse City, The Playhouse was the first theater to produce Butterflies are Free which later went to Broadway. The Theater has had one of the most active apprentice programs in the country providing practical experience both on and backstage for young people with their sights on theatrical careers. Among Playhouse apprentices who have continued on in the entertainment business are actress Meredith Baxter, director Peter Bogdonovich and Kate Reindeers.